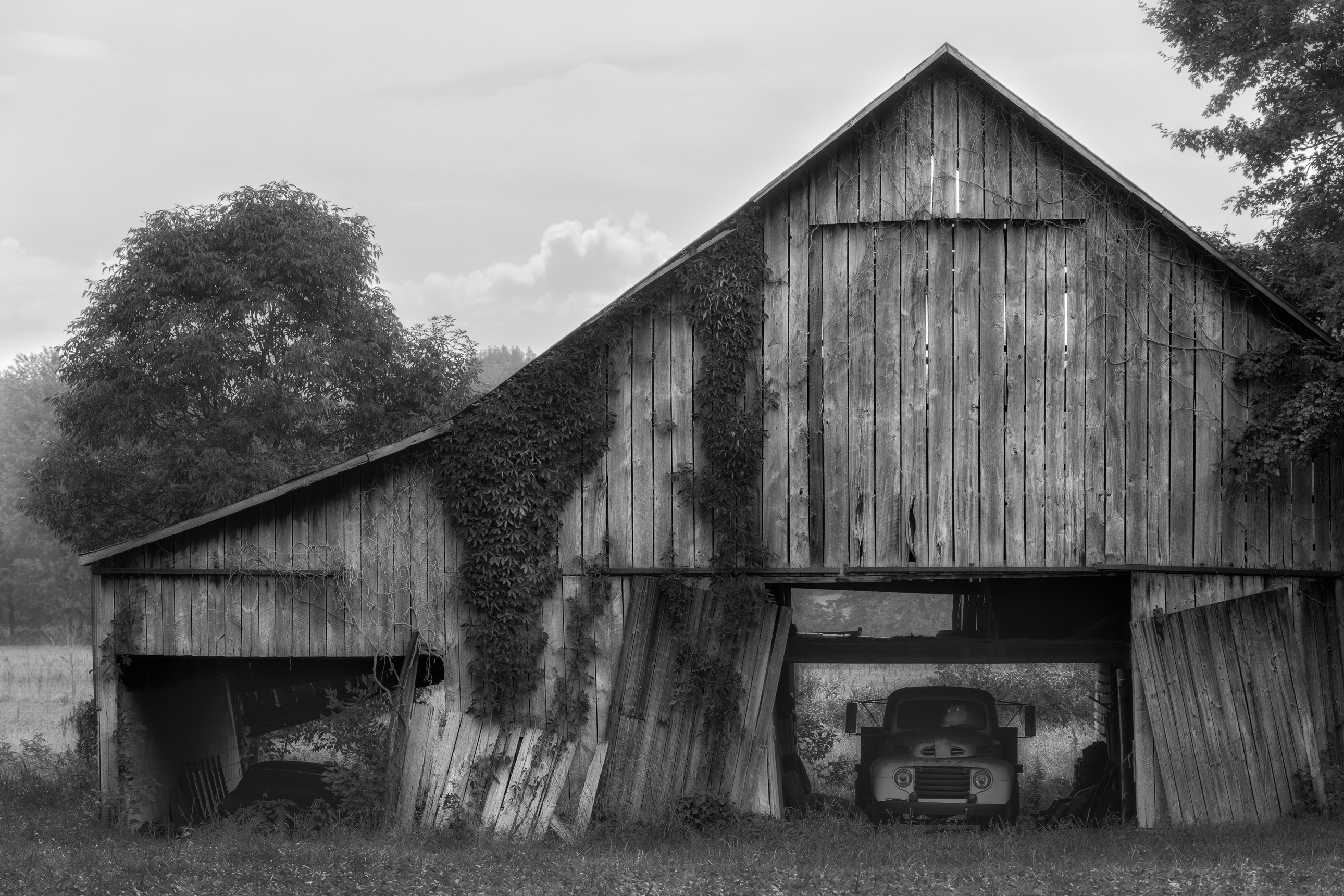 “What are you doing?” asked the man in overalls. “Taking a photo of this barn” I replied. Bewildered, the man replied, “why?”

I love photographing old barns. During my road trip to the south in the summer of 2016, I had no shortage of weathered, old, abandoned-looking barns every few miles. And nowhere else were these barns more prolific than in Kentucky.

Many of the barns in Kentucky are black, which I found to be quite unique. Farmers mixed in creosote to paint their barns black and this had two benefits to the farm. The dark color obviously raised the temperature which helped cure the tobacco stored inside. The creosote also helped deter termites, one of wood’s worst enemies.

When I saw this particular tobacco barn, I noticed an old farm truck parked inside and vines of kudzu draping over the front. I had to turn around and get a photo. I parked along the side of the road on what I think was the original entrance to the barn. I setup my tripod and camera across the road along the adjacent hillside and started shooting.

A few minutes into my session, the sound of Cummins diesel rattled its way near me. Out of the late 90s Dodge pickup emerged what looked like a hard-working man wearing overalls and a hat. I said “Hi”. Instead of reciprocating with another “Hi”, he just said “What are you doing?” in a gruff, insinuating tone. I told him I was taking a picture of the barn. He did not seem to understand why in the world someone would want to photograph a barn, his barn, just for fun.

I must have looked a bit out of place, perhaps even suspicious. Driving a white Japanese SUV, wearing a baseball cap backward and most of all… photographing this person’s property with a big camera and a huge 70-200MM Canon lens.

Apparently, this man has experienced some vandals in his barn lately. He told me someone stole the radiator out of his Ford F1 recently. I can understand his cause for concern. While I wasn’t trespassing or doing anything illegal, I still did not want to upset the man. No photo of mine is worth making someone mad. After all, my life’s goal is to “See the world and meet its people”, not piss-off its people.

I told him I was just a photographer who enjoyed photographing old, decaying, abandoned stuff and that I would not disclose the location. He was fine with that but still had no idea why in the world someone would want to photograph old crusty things. Too bad he didn’t see the beauty in this old barn that I did.