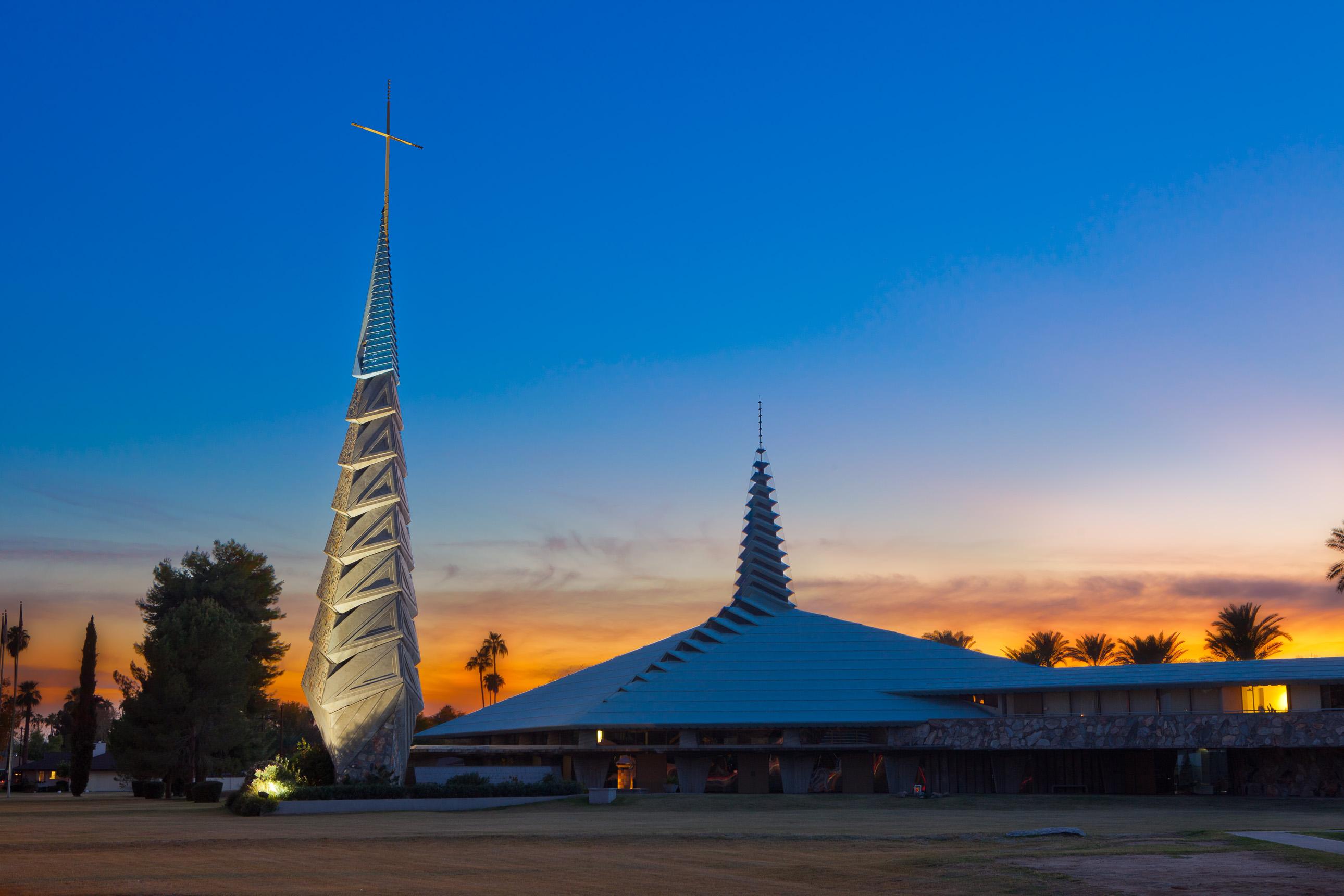 Drive north of Camelback on 7th Avenue in Phoenix, and you don’t see much. It’s a common sort of suburban highway-street formerly lined by orchards.

Really, that describes most of North Central Phoenix: Similar FHA ranch homes on large lots greened by flood irrigation, and gentrified by two — now going on three — generations of young professionals. Farm roads once carried citrus to market. Now wider and smoother, they carry accountants, lawyers, and cardiologists to downtown office buildings. It’s very nice, but all rather ordinary. Certain conveniences have been added over the years — at least at the major intersections.  Pass the Circle K at Bethany Home Road, go about half a mile, and . . . your heart stops.

First Christian Church is an actual, honest-to-God Frank Lloyd Wright design. Yes, it’s necessary to point this out: Many “Wright” designs in the Valley are actually tributes, or the work of understudies. The Arizona Biltmore is probably the best-known Frank Lloyd Wright building in town — or at least the best-known FLW building that wasn’t designed by him at all. Onetime understudy Albert Chase McArthur gets the credit in that case.

But in the late 1940’s, Wright himself was commissioned to design a church that would anchor a Bible college. The venture went bankrupt before the church could be built. Wright died in 1959. His designs sat on the shelf until 1970 or so, when a minister named Boyce approached FLW’s widow and offered to buy them. By 1973, the fantastic 120-tall bell tower had risen over the low, unsuspecting tract homes around it. It’s a mid-century modern masterpiece that always takes newcomers by surprise.

I’d like to say Frank Lloyd Wright’s First Christian Church serves as an anchor for the neighborhood, inspiring residents with its cosmic, sacred, modernist poetry and serving as a beacon for a sort of bohemian, artistic renewal. This doesn’t seem to be the case.  Seventh Avenue is a fast street. This historic midcentury icon is passed by thousands of distracted drivers each day. This is sad in a way, but at least keeps it from being overrun by visitors. If you’re in the neighborhood — especially on a morning or early evening the cooler months — drop by and slowly soak in the vision of one of America’s great originals: himself a monument towering over a sea of the ordinary.